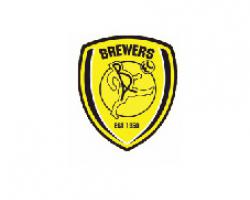 Burton Albion 1-0 Southend: Match Report - view commentary, squad, and statistics of the game as it happened.McGurk goal gives Brewers the edgeAdam McGurk's goal gave Burton a slender 1-0 advantage to take to Southend for next weekend's Sky Bet League Two play-off semi-final second leg.The two teams came into the tie with identical records from their 46 league games this season, separated only by the Shrimpers' superior goal difference in the the final table, and that was reflected in an evenly-matched contest at the Pirelli Stadium.McGurk's 11th goal of the campaign in the last minute of the first half edged it for Burton, who protected their lead stoically after the break following a red card for central defender Ian Sharps on the hour mark.Albion looked uncertain at the back early on

Dean Lyness had to come out and save at Will Atkinson's feet after the Southend midfielder skipped past Zeli Ismail and Phil Edwards to shoot.Barry Corr's header gave the Shrimpers a 1-0 win last weekend on the final day of the regular league season but the striker was unable to repeat the trick this time when left unmarked inside the area.Burton's first chance arrived after 11 minutes but Ismail's far-post volley was blocked by Ben Coker

Lee Bell could not keep his shot down shortly afterwards after capitalising on a loose piece of play by visiting centre-half John Egan.Southend were winning a lot of headers against the Burton back line

Kevan Hurst was the latest to do so after 21 minutes but fortunately for Albion his effort was straight at Lyness, who then preserved his side's lead with a superb save.A lovely first touch and shot from Atkinson just inside the area looked destined for the top corner of the net until Lyness plucked the ball out of the air with both hands and held the shot.Southend goalkeeper Daniel Bentley was forced to make his first real save after 38 minutes when parrying McGurk's low shot but there was little he could do to stop the striker from opening the scoring on the stroke of half-time.McGurk demonstrated great composure, with two Southend defenders for company, to lift the ball over the advancing goalkeeper after latching on to Billy Kee's pass.But Sharps offered the Shrimpers a way back into the game when he collected two yellow cards in as many minutes - the first for handball and the second for a trip on Ryan Leonard.Striker Kee was the man to make way for David Gray as Burton boss Gary Rowett reinforced his defence.Despite their numerical advantage, Southend did not really trouble Lyness until the closing stages when he produced a superb block to deny Leonard after 87 minutes before diving into a sea of onrushing players to cut out a low cross in injury time.So Burton held on to win by a familiar scoreline, with 11 of their 19 league victories being 1-0