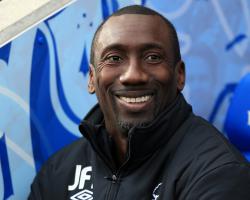 Burton Albion 1-0 Luton: Match Report - view commentary, squad, and statistics of the game as it happened.Hatters sent for a Burton Jimmy Floyd Hasselbaink continued his perfect start as Burton's manager with a 1-0 victory to topple League Two leaders Luton.Full-back Phil Edwards struck early in the second half to give the Dutchman his second win in as many matches.The result ended Luton's 11-game unbeaten league run stretching back to early September - and the misery was completed for the visitors when defender Luke Wilkinson was sent off for bringing down Matty Palmer in the fourth minute of added time.Burton goalkeeper Jon McLaughlin acrobatically tipped over a Luke Guttridge volley to deny the Hatters the lead after only two minutes.Once the visitors' early pressure fizzled out, the first half developed into a defensive stalemate.The home team's only chance before the break fell to defender Edwards but his header failed to trouble keeper Mark Tyler.The full-back made no mistake when opportunity knocked again in the 47th minute, meeting a Palmer corner kick to thunder in an eight-yard header into the back of the net off the underside of the crossbar.Burton could have doubled their lead but top scorer Alex MacDonald fired wide of a gaping net in the 75th minute.Luton piled on late pressure and McLaughlin did well to keep out a Jonathan Smith shot

But Hasselbaink's boys held on to move up to second spot in the table and go above the Hatters, who after defeat at the Pirelli Stadium slipped down to third place